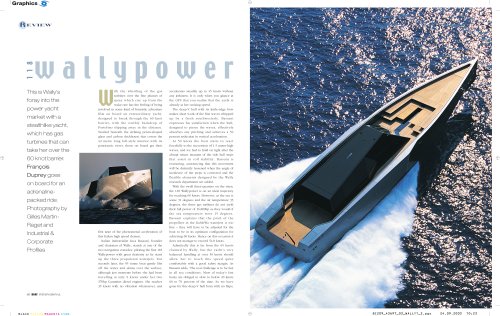 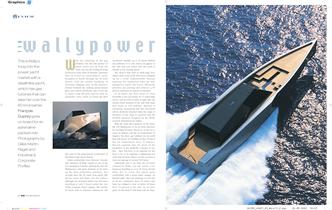 EVIEW This is Wally’s foray into the power yacht market with a stealthlike yacht, which has gas turbines that can ith the whistling of the gas turbines over the fine plumes of spray which rise up from the wake one has the feeling of being involved in some kind of futuristic adventure film on board an extraordinary yacht, designed to break through the 60 knot barrier, with the earthly backdrop of Portofino slipping away in the distance. Nestled beneath the striking prism-shaped glass and carbon deckhouse that covers the 12 metre long loft-style interior with its panoramic views, those on board get their take her over the 60 knot barrier. François Duprey goes on board for an adrenalinepacked ride. Photography by Gilles MartinRaget and Industrial & Corporate Profiles first taste of the phenomenal acceleration of this Italian high speed demon. Italian industrialist Luca Bassani, founder and chairman of Wally, stands at one of the two navigation consoles, piloting the first 118 Wallypower with great dexterity as he starts up the three propulsion waterjets. Ten seconds later, the 95 tonne boat gently lifts off the water and skims over the surface, although just moments before she had been travelling at only 9 knots under her two 370hp Cummins diesel engines. She reaches 35 knots with no vibration whatsoever, and accelerates steadily up to 45 knots without any jerkiness. It is only when you glance at the GPS that you realise that the yacht is already at her cruising speed. The deep-V hull with its knife-edge bow makes short work of the first waves whipped up by a fresh southwesterly. Bassani expresses his satisfaction when the hull, designed to pierce the waves, effectively absorbes any pitching and achieves a 50 percent reduction in vertical acceleration. At 50 knots the boat starts to react forcefully to the succession of 1.5 metre-high waves, and we had to hold on tight after the abrupt return moment of the side hull steps that assist in roll stability. Bassani is reassuring, announcing that this movement will be distinctly lessened when the angle of incidence of the steps is corrected and the flexible elements designed by the Wally research department are added. With the swell three-quarters on the stern, the 118 Wallypower is on an ideal trajectory for reaching 60 knots. However, as the sea is some 31 degrees and the air temperature 33 degrees, the three gas turbines do not yield their full power of 16,800hp as they would if the sea temperature were 15 degrees. Bassani explains that the pitch of the propellers in the KaMeWa waterjets is too fine – they will have to be adjusted for the boat to be in its optimum configuration for achieving 60 knots. Hence on this occasion it does not manage to exceed 54.8 knots. Admittedly this is far from the 65 knots claimed by Wally, but the yacht’s very balanced handling at over 50 knots should allow her to reach this speed quite comfortably with a good safety margin. As Bassani adds, ‘The real challenge is to be fast in all sea conditions. Most of today’s fast boats are obliged to slow to below 20 knots 60 to 70 percent of the time. So we have gone for this deep-V hull form with no flaps, 68 BOAT INTERNATIONAL BLACK YELLOW MAGENTA CYAN BI209_43697_03_WALLY1_2.pgs 24.09.2003 10:23 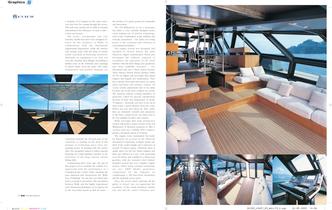 a deadrise of 22 degrees in the stern, and a very fine bow for cutting through the waves The tank tests carried out by SSPA in Sweden demonstrated the efficiency of such a hull - The yacht's aerodynamic and very futuristic stealth boat lines were designed in- house by the architects at Wally, in collaboration with the Intermarine engineering department, while the interior and styling came with the help of Italian studio Lazzarini & Pickering Architects Absolutely no equipment is on view, not even the essential deck fittings. Everything is hidden away in the bulwarks and coamings or below... 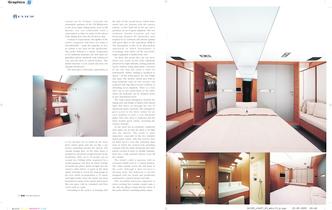 carried out by Technav. Certainly the remarkable quietness of the 118 Walfypower is one of its major selling points. Even at full throttle, you can comfortably hold a conversation or listen to music in the saloon if the sliding door onto the aft deck is shut Contrary to expectations, the rigidity of the yacht's composite hull does not make it uncomfortable - quite the opposite in fact, as carbon is not used for the quickworks The yacht's bottom is a classic construction of 30 millimetre laminate, the hull skins are glassfibre/carbon sandwich with balsawood core and the deck is carbon/Nomex.... 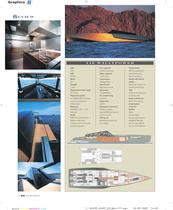 All Wally catalogs and brochures