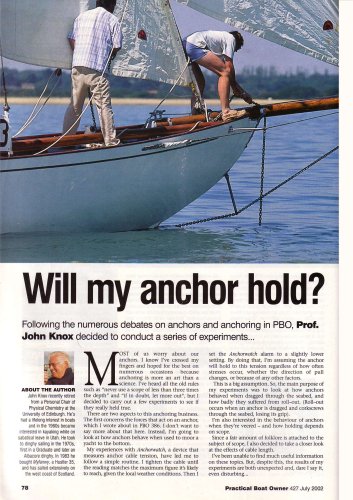 Will my anchor hold? Following the numerous debates on anchors and anchoring in PBO, Prof. John Knox decided to conduct a series of experiments... John Knox recently retired from a Personal Chair of had a lifelong interest in boats interested in kayaking while on sabatical leave in Utah. He took first in a Graduate and later an bought Myfanwy, a Hustler 35, the west coast of Scotland. MOST of us worry about our anchors. I know I've crossed my Angers and hoped for the best on numerous occasions because anchoring is more an art than a science. I've heard all the old rules such as "never use a scope of less than three times the depth" and "if in doubt, let more out", but I decided to carry out a few experiments to see if they really held true. There are two aspects to this anchoring business. The first concerns the forces that act on an anchor, which I wrote about in PBO 386. I don't want to say more about that here. Instead, I'm going to look at how anchors behave when used to moor a My experiences with Anchorwatch, a device that measures anchor cable tension, have led me to follow a simple routine. I tighten the cable until the reading matches the maximum figure it's likely to reach, given the local weather conditions. Then I set the Anchorwatch alarm to a slightly lower setting. By doing that, I'm assuming the anchor will hold to this tension regardless of how often stresses occur, whether the direction of pull changes, or because of any other factors. This is a big assumption. So, the main purpose of my experiments was to look at how anchors behaved when dragged through the seabed, and how badly they suffered from roll-out. (Roll-out occurs when an anchor is dragged and corkscrews through the seabed, losing its grip). I'm also interested in the behaviour of anchors when they're veered - and how holding depends Since a fair amount of folklore is attached to the subject of scope, I also decided to take a closer look at the effects of cable length. I've been unable to find much useful information on these topics. But, despite this, the results of my experiments are both unexpected and, dare I say it, even disturbing... Practical Boat Owner 427 July 2002

Will my anchor hold? ^^L. tactor speak. ANGEL - a weight used to make the pull on the chain more horizontal and reduce snatching. CABLE - chain or warp, also anchor chain. the anchor chain so that it's laid down on the deck in big loops. ready to be let into the water. ROLL-OUT - when an anchor through the seabed, losing its grip. SCOPE - the length of anchor TRIPPING LINE - a line. made fast to the top of the anchor buoy. It can be used to pull the anchor out of the water head first. VEER - to let out more cable. WARP - also known as a 'cable'. A rope used to moor a boat to a fixed point....

Practical cruising Will my anchor hold? Bruce and SPADE anchors, which initially lie on their sides, must roll into a vertical position before they develop a hold. The others naturally adopt a vertical position. A previous article noted that anchors which lie comfortably on a flat surface (principally the CQR skidding across the seabed and failing to find grip (Fig 1). ■ Over the first metre of drag in standard anchors began to bury themselves, including those that initially lay on their sides. The force needed to drag the anchors rose slowly to a steady, or plateau, value. At this point,...

FIG 4: HOLD V DISTANCE DRAGGED * NB: to show the curves in Fig 3 clearly, a factor of 'Z' has been added. For example, the Bruce anchor Is measured from zero, but starts at 400 kg instead of 0 kg, because its T factor is 300 kg. digging in both flukes by hand. If allowed to set itself naturally, the results were significantly anchors reared up, with their flukes pointing down into the sand, as they were pulled. This made the anchor tip over sideways and engage only one fluke. The anchor then either direction of pull, leading to the poor holding mentioned above. kg Brittany. Both gave...

All Sea Tech and Fun - Spade catalogs and brochures