Benefits of the SPADE anchor
11Pages 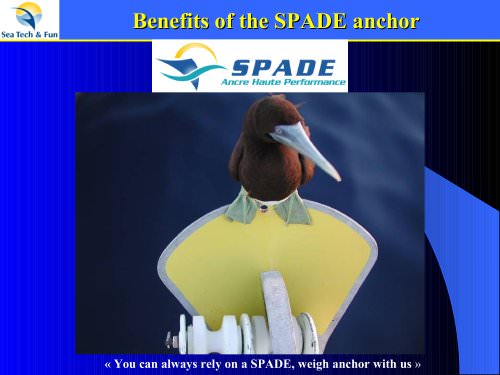 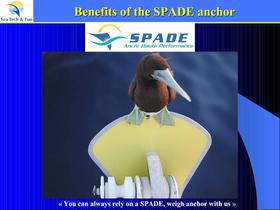 Benefits of the SPADE anchor « You can always rely on a SPADE, weigh anchor with us » 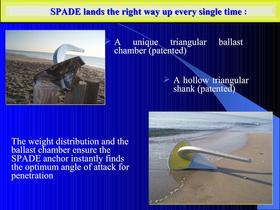 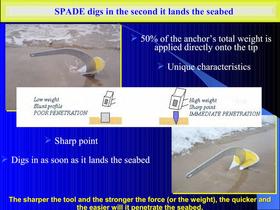 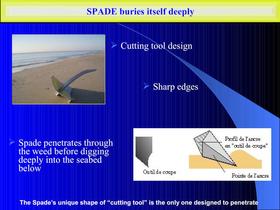 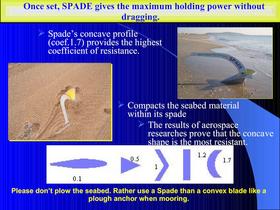 Once set, SPADE gives the maximum holding power without ^ Spade's concave profilée. ^ Compacts the seabed material researches prove that the concav shat>e is the most resistant. Please don't plow the seabed. Rather use a Spade than a convex blade like a plough anchor when mooring. 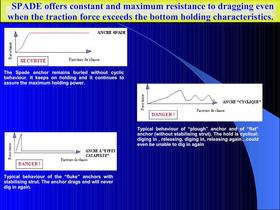 SPADE offers constant and maximum resistance to dragging even when the traction force exceeds the bottom holding characteristics. ANCRE SPADE The Spade anchor remains buried without cyclic behaviour. It keeps on holding and it continues to assure the maximum holding power. Typical behaviour of the "fluke" anchors with stabilising strut. The anchor drags and will never Typical behaviour of "plough" anchor and of "flat" anchor (without stabilising strut). The hold is cyclical: diging in , releasing, diging in, releasing again...could even be unable to dig in again 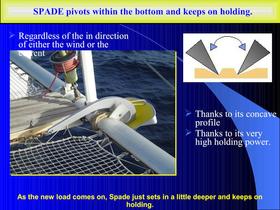 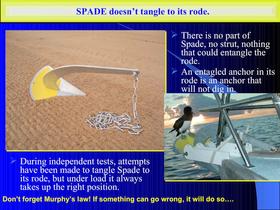 SPADE doesn't tangle to its rode. Spade, no strut, nothing that could entangle the rode is an anchor that will noKdig ' ^ During independent tests, attempts have been made to tangle Spade to its rode, but under load it always takes up the right position. Don't forget Murphy's law! If something can go wrong, it will do so. 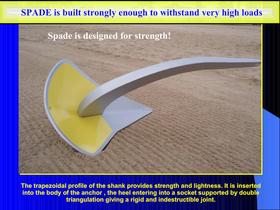 SPADE is built strongly enough to withstand very high loads Spade is designed for strength! The trapezoidal profile of the shank provides strength and lightness. It is inserted into the body of the anchor , the heel entering into a socket supported by double triangulation giving a rigid and indestructible joint. 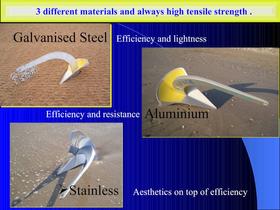 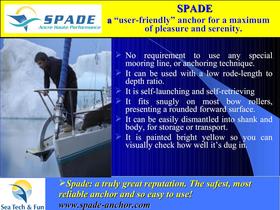 SPADE a “user-friendly” anchor for a maximum of pleasure and serenity. No requirement to use any special mooring line, or anchoring technique. It can be used with a low rode-length to depth ratio. It is self-launching and self-retrieving It fits snugly on most bow rollers, presenting a rounded forward surface. It can be easily dismantled into shank and body, for storage or transport. It is painted bright yellow so you can visually check how well it’s dug in. Spade: a truly great reputation. The safest, most reliable anchor and so easy to use! www.spade-anchor.com

All Sea Tech and Fun - Spade catalogs and brochures