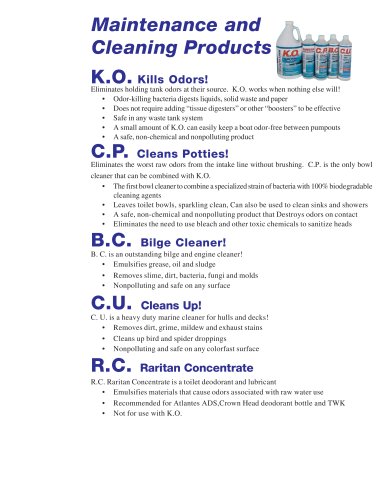 Maintenance and Cleaning Products K.O. Kills Odors! Eliminates holding tank odors at their source. K.O. works when nothing else will! • Odor-killing bacteria digests liquids, solid waste and paper • Does not require adding “tissue digesters” or other “boosters” to be effective • Safe in any waste tank system • A small amount of K.O. can easily keep a boat odor-free between pumpouts • A safe, non-chemical and nonpolluting product C.P. Cleans Potties! B.C. Bilge Cleaner! C.U. Cleans Up! Eliminates the worst raw odors from the intake line without brushing. C.P. is the only bowl cleaner that can be combined with K.O. • The first bowl cleaner to combine a specialized strain of bacteria with 100% biodegradable cleaning agents • Leaves toilet bowls, sparkling clean, Can also be used to clean sinks and showers • A safe, non-chemical and nonpolluting product that Destroys odors on contact • Eliminates the need to use bleach and other toxic chemicals to sanitize heads B. C. is an outstanding bilge and engine cleaner! • Emulsifies grease, oil and sludge • Removes slime, dirt, bacteria, fungi and molds • Nonpolluting and safe on any surface C. U. is a heavy duty marine cleaner for hulls and decks! • Removes dirt, grime, mildew and exhaust stains • Cleans up bird and spider droppings • Nonpolluting and safe on any colorfast surface R.C. Raritan Concentrate R.C. Raritan Concentrate is a toilet deodorant and lubricant • Emulsifies materials that cause odors associated with raw water use • Recommended for Atlantes ADS,Crown Head deodorant bottle and TWK • Not for use with K.O.

K.O. KILLS ODORS! K.O. Is Not A Chemical Product. K.O. utilizes live, odor-killing bacteria which digest liquids, solid waste and paper, totally emulsifying them so there’s no need to add “tissue digesters” or other “boosters” to your system. The bacteria in K.O. actually neutralize the odor-causing elements in waste, effectively converting the contents of your holding tank to an odor-free product. K.O. Is More Effective Than Any Chemical Or Enzyme Product. Chemicals only mask odor temporarily. Although they kill odorcausing bacteria, chemicals also kill other bacteria that suppress odor....

*Prices are pre-tax. They exclude delivery charges and customs duties and do not include additional charges for installation or activation options. Prices are indicative only and may vary by country, with changes to the cost of raw materials and exchange rates.
Compare
Don’t compare this product
Compare up to 10 products