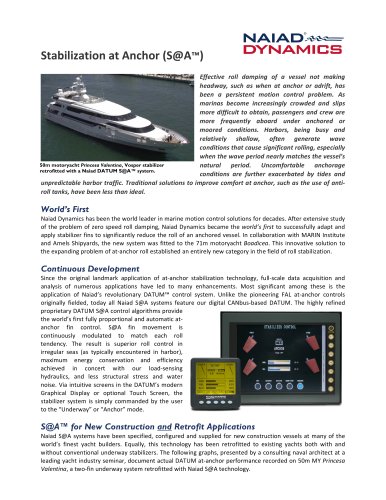 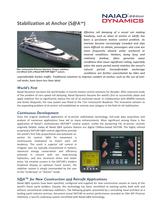 Stabilization at Anchor (S@A™) Effective roll damping of a vessel not making headway, such as when at anchor or adrift, has been a persistent motion control problem. As marinas become increasingly crowded and slips more difficult to obtain, passengers and crew are more frequently aboard under anchored or moored conditions. Harbors, being busy and relatively shallow, often generate wave conditions that cause significant rolling, especially when the wave period nearly matches the vessel’s 50m motoryacht Princesa Valentina, Vosper stabilizer natural period. Uncomfortable anchorage retrofitted with a Naiad DATUM S@A™ system. conditions are further exacerbated by tides and unpredictable harbor traffic. Traditional solutions to improve comfort at anchor, such as the use of anti‐ roll tanks, have been less than ideal. World’s First Naiad Dynamics has been the world leader in marine motion control solutions for decades. After extensive study of the problem of zero speed roll damping, Naiad Dynamics became the world’s first to successfully adapt and apply stabilizer fins to significantly reduce the roll of an anchored vessel. In collaboration with MARIN Institute and Amels Shipyards, the new system was fitted to the 71m motoryacht Boadicea. This innovative solution to the expanding problem of at‐anchor roll established an entirely new category in the field of roll stabilization. Continuous Development Since the original landmark application of at‐anchor stabilization technology, full‐scale data acquisition and analysis of numerous applications have led to many enhancements. Most significant among these is the application of Naiad’s revolutionary DATUM™ control system. Unlike the pioneering FAL at‐anchor controls originally fielded, today all Naiad S@A systems feature our digital CANbus‐based DATUM. The highly refined proprietary DATUM S@A control algorithms provide the world’s first fully proportional and automatic at‐ anchor fin control. S@A fin movement is continuously modulated to match each roll tendency. The result is superior roll control in irregular seas (as typically encountered in harbor), maximum energy conservation and efficiency achieved in concert with our load‐sensing hydraulics, and less structural stress and water noise. Via intuitive screens in the DATUM’s modern Graphical Display or optional Touch Screen, the stabilizer system is simply commanded by the user to the “Underway” or “Anchor” mode. S@A™ for New Construction and Retrofit Applications Naiad S@A systems have been specified, configured and supplied for new construction vessels at many of the world’s finest yacht builders. Equally, this technology has been retrofitted to existing yachts both with and without conventional underway stabilizers. The following graphs, presented by a consulting naval architect at a leading yacht industry seminar, document actual DATUM at‐anchor performance recorded on 50m MY Princesa Valentina, a two‐fin underway system retrofitted with Naiad S@A technology. 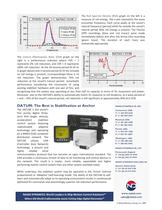 The Roll Spectral Density (RSD) graph on the left is a measure of roll energy. The x‐axis represents the wave encounter frequency. Each curve peaks at the vessel’s natural frequency (period) while far outside the vessel’s natural period little roll energy is present. The Passive (Off) recordings (blue and red traces) were made immediately before and after the Active (On) recording (green trace). The duration of each trace was statistically appropriate. The Control Effectiveness Ratio (CER) graph on the right is a performance ...

All NAIAD DYNAMICS catalogs and brochures