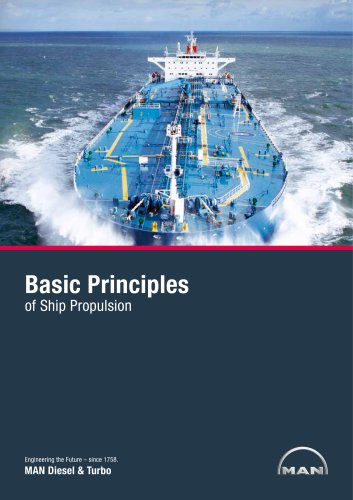 Basic Principles Engineering the Future - since 1758.

Basic Principles of Ship Propulsion Scope of this Paper scribed for free sailing in calm weather, For the purpose of this paper, the term This paper is divided into three chap- and followed up by the relative heavy/ “ship” is used to denote a vehicle em- ters which, in principle, may be con- light running conditions which apply ployed to transport goods and persons sidered as three separate papers but when the ship is sailing and subject to from one point to another over water. which also, with advantage, may be different types of extra resistance, like Ship propulsion normally occurs with...

Indication of a ship’s size (summer freeboard/scantling draught) occurring draught between the fully- loaded and the ballast draught is used. at an arbitrary water line, its displace- A ship’s displacement can also be ex- ment is equal to the relevant mass of pressed as the volume of displaced When a ship in loaded condition floats water displaced by the ship. Displace- The overall length of the ship LOA is normally of no consequence when calculating the hull’s water resistance. The ment is thus equal to the total weight, all told, of the relevant loaded ship, nor- Gross register tons mally...

Examples of block coefficients referred to design draught and LPP Ship type AM Approximate ship speed V in knots General cargo Container ship Ferry boat Bulk carrier Length between perpendiculars: Length on waterline: Length overall: Breadth on waterline Draught: Midship section area: volume ∇ and the volume of a box with dimensions LWL x BWL x D, see Fig. 3, i.e.: Waterline plane In the case cited above, the block coef- ficient refers to the length on waterline LWL. However, shipbuilders often use block coefficient CB,PP based on the length between perpendiculars, LPP, in which case the...

A small block coefficient means less Generally, the water plane area coef- Longitudinal Centre of Buoyancy LCB ficient is some 0.10 higher than the The Longitudinal Centre of Buoyancy sibility of attaining higher ship speeds. (LCB) expresses the position of the centre of buoyancy and is defined as Table 3 shows some examples of block coefficient sizes referred to the design the distance between the centre of buoyancy and the mid-point between draught, and the pertaining service This difference will be slightly larger the ship’s foremost and aftmost per- speeds, on different types of ships....

which can be divided into three main On the basis of many experimental tank often some 70-90% of the ship’s total tests, and with the help of pertaining di- resistance for low-speed ships (bulk mensionless hull parameters, some of carriers and tankers), and sometimes which have already been discussed, less than 40% for high-speed ships methods have been established for (cruise liners and passenger ships), Ref. calculating all the necessary resistance [1]. The frictional resistance is found as coefficients C and, thus, the pertaining The influence of frictional and residual resistances...

The power delivered to the propeller, The right column is valid for low-speed cific residual resistance coefficient CR is PD, in order to move the ship at speed ships like bulk carriers and tankers, and described in specialised literature, Ref. V is, however, somewhat larger. This is the left column is valid for very high- [2], and the residual resistance is found due, in particular, to the flow conditions speed ships like cruise liners and fer- around the propeller and the propeller ries. Container ships may be placed in efficiency itself, the influences of which are discussed in the next...

This tendency is also shown in Fig. 5 for Increase of ship resistance in service, Experience, Ref. [4], shows that hull a 600 teu container ship, originally de- fouling with barnacles and tube worms signed for the ship speed of 15 knots. During the operation of the ship, the may cause an increase in drag (ship re- Without any change to the hull design, paint film on the hull will break down. sistance) of up to 40%, with a drastic the ship speed for a sister ship was re- Erosion will start, and marine plants and reduction of the ship speed as the con- quested to be increased to about 17.6...

reach extreme values up to 220%, with when for example, as basis, referring to the design draught Ddes. Unfortunately, no data have been pub- For equal propulsion power P = Pdes lished on increased resistance as a function of type and size of vessel. The larger the ship, the less the relative increase of resistance due to the sea. On the other hand, the frictional resistance For equal ship speed V = Vdes of the large, full-bodied ships will very easily be changed in the course of time because of fouling. In practice, the increase of resistance Normally, the draught ratio D/Ddes caused by...

Open the catalog to page 14