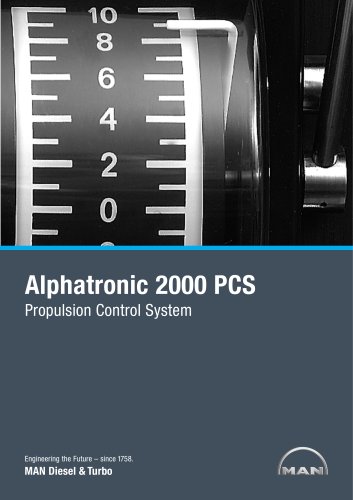 Alphatronic 2000 PCS Propulsion Control System Introduction The purpose of this Product Informa- Ship’s Propulsion Power – controlled by Alphatronic tion brochure is to act as a guideline MAN Diesel & Turbo, launched the first during project planning and lay out CP propeller as part of a propulsion The latest version of the Alphatronic ing modes, engine load sharing, redundant propulsion using PTI/PTH etc. system in 1902. A complete package system described in this material is type trol Systems. The brochure gives a including engine, clutch, shafting and description of the system in...

Load changes controlled in such a In the process of projecting and estimating propulsion systems, the asso- the engine speed within the range re- ciated control system is a ‘soft’ item Overall system reliability and durability Type approval by all major Classifica- quired, and thus prevents blackout frequently handled with less attention. way that the governor always keeps during shaft alternator operation The engine and propeller manufac- The propulsion control system is often regarded as a necessary auxiliary Good long term engine performance turer’s advantage element that just follows...

Alphatronic Propulsion Control System – General 1 Manoeuvre panels for main bridge With this electronic propulsion control 2 Manoeuvre panel for engine control system it is possible for the navigator to manoeuvre the ship from the bridge. Engine equipment The governor and the safety system are considered part of the engine and therefore not a part of the propulsion 3 Main cabinet including the process computer control system. Nevertheless, there is a close connection between these. For The navigator may operate the control 4 Propeller servo electronics (closed details of interfacing engine,...

Primary control function Load diagram The manoeuvre panels are fitted with manoeuvre levers for controlling the propeller speed and pitch. The lever on the bridge centre panel and the lever on the ECR panel have individual potenti- ometers connected to the main cabinet. Depending on the chosen mode of op- eration, these lever signals will be used for setting the engine speed and the propeller pitch accordingly. An electric speed setting signal is transmitted from the PCS main cabinet to the engine governor. If the engine has a governor with pneumatic speed setting, Theoretical Propeller...

parameters. Fuel pump index, engine speed and charge air pressure are used as feedback. The engine load is kept within the limits as specified by the Running up load program Engine load limit [%] 120 load limit curve of the engine. The load curve for combined mode is adjusted according to the specific engine and propulsion equipment – taking fuel oil consumption, propeller efficiency and manoeuvrability into consideration in order to obtain optimum overall propul- sion efficiency. Control lever orders and commands Run up, load restrictions cancelled In order to allow the engine and the...

The automatic load control is, however, The main manoeuvre panel consists of The propulsion plant can be operated in still active for engine overload protec- three individual panels: three different modes. tion. With the shaft alternator in service, the load control system can handle a Propeller Instrument Panel, PIP Indi- Combined mode crash stop order, without any risk of a cating propeller speed and propel- In combined mode, both pitch and ler pitch. These two instruments are speed are controlled by using the lever. working independently of the remote This is done according to the combi-...

Interfaces to External Systems Power Boost The Alphatronic remote control system This feature may be relevant for short can be interfaced with a variety of exter- term boosting of the propulsion power. nal systems. Included in this document, It is necessary that the gear and the there is a description of a number of of- propeller are designed for the total ten used interfaces that have proven to power of diesel engine and shaft motor. work. For each of the below described It is necessary that the amount of power interfaces, there is a more comprehen- supplied by the shaft motor is...

Open the catalog to page 14