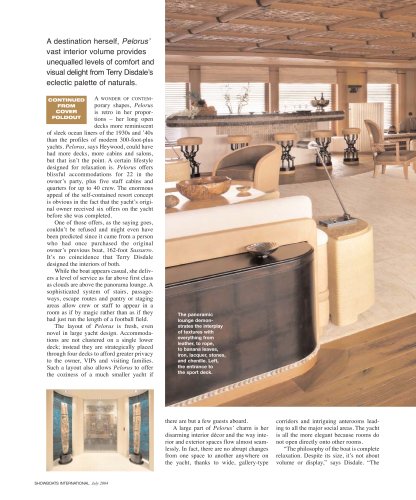 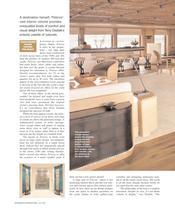 A destination herself, Pelorus’ vast interior volume provides unequalled levels of comfort and visual delight from Terry Disdale’s eclectic palette of naturals. A WONDER OF CONTEMporary shapes, Pelorus is retro in her proportions – her long open decks more reminiscent of sleek ocean liners of the 1930s and ’40s than the profiles of modern 300-foot-plus yachts. Pelorus, says Heywood, could have had more decks, more cabins and salons, but that isn’t the point. A certain lifestyle designed for relaxation is. Pelorus offers blissful accommodations for 22 in the owner’s party, plus five staff cabins and quarters for up to 40 crew. The enormous appeal of the self-contained resort concept is obvious in the fact that the yacht’s original owner received six offers on the yacht before she was completed. One of those offers, as the saying goes, couldn’t be refused and might even have been predicted since it came from a person who had once purchased the original owner’s previous boat, 162-foot Sussurro. It’s no coincidence that Terry Disdale designed the interiors of both. While the boat appears casual, she delivers a level of service as far above first class as clouds are above the panorama lounge. A sophisticated system of stairs, passageways, escape routes and pantry or staging areas allow crew or staff to appear in a room as if by magic rather than as if they had just run the length of a football field. The layout of Pelorus is fresh, even novel in large yacht design. Accommodations are not clustered on a single lower deck; instead they are strategically placed through four decks to afford greater privacy to the owner, VIPs and visiting families. Such a layout also allows Pelorus to offer the coziness of a much smaller yacht if CONTINUED FROM COVER FOLDOUT The panoramic lounge demonstrates the interplay of textures with everything from leather, to rope, to banana leaves, iron, lacquer, stones, and chenille. Left, the entrance to the sport deck. there are but a few guests aboard. A large part of Pelorus’ charm is her disarming interior décor and the way interior and exterior spaces flow almost seamlessly. In fact, there are no abrupt changes from one space to another anywhere on the yacht, thanks to wide, gallery-type SHOWBOATS INTERNATIONAL July 2004 corridors and intriguing anterooms leading to all the major social areas. The yacht is all the more elegant because rooms do not open directly onto other rooms. “The philosophy of the boat is complete relaxation. Despite its size, it’s not about volume or display,” says Disdale. “The

By MARILYN MOWER Photos by BOB MARCHANT, CHRIS GONTA & RICHARD SEATON Pelorus design inspiration came from Sussurro, but the object was to move on from there. I had a very free hand with the interior – there’s more of my design ideas in this boat than any other and as such it was a very creative process for me.” From her rough oak and slate floors to woven banana leaf ceilings, all surfaces and furnishings – apart from a couple of chairs – were designed by Disdale and made especially for Pelorus. Disdale, known for juxtaposing millionyear-old ammonites with 21st century lacquered surfaces,...

The salon is a more cozy space and opens to the dining room, shown below, with its terrace open for unlimited views. coconut bark from the Philippines and antique Chinese opium mats used as wall coverings, driftwood table tops from Bali, iron sculptures and leather ceilings from England, plus intriguing interplay of cotton, linen, suede, raffia, nickel, bronze, pewter, amethysts, and, of course, the beloved fossils. By day, Pelorus’ interior is flooded by natural daylight from a staggering number of SHOWBOATS INTERNATIONAL July 2004 oversized windows. By night, the interior is intimate,... 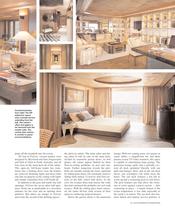 Counterclockwise from right: The VIP stateroom opens onto a private terrace extending from the hull. The owner’s office and gallery is far removed from the master suite. The central stair column. A corridor to guest accommodations. jump off the treadmill into the ocean. All four of Pelorus’ custom tenders were designed by Heywood and Sam Sorgiovanni and built at Vikal in Perth, Australia, and all four store on the main deck aft of the salons. This open-air, full-beam tender bay transforms into a floating disco once the tenders are removed. Rotating lights and disco balls clip into... 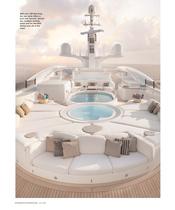 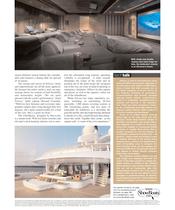 With single and double chaises plus bean bags for kids, the dedicated cinema is an AV-lover’s dream. raised platform tucked behind the considerable mast features a dining table for upward of 16 guests. The sweeps and curves of Pelorus’ decks and superstructure are all the more appreciable because the entire yacht is steel, an engineering choice for reasons of hull flexibility and metacentric height. “We are quite pleased with the yacht’s performance,” noted Pelorus’ build captain Howard Crowther. “With two bow thrusters and oversized, independent rudders that swing through fifty-five...

All Lurssen Yachts catalogs and brochures