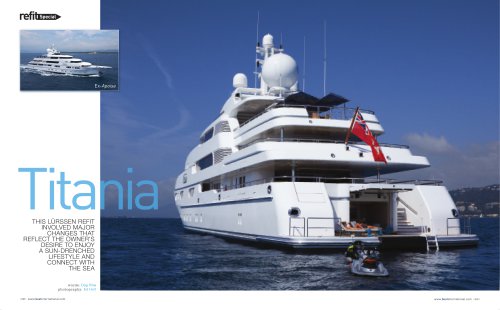 Bidding among prospective owners started at €20 million, and less than 15 minutes later the yacht was sold for €34.75 million In 2006, the Lürssen yard in Rendsburg delivered Apoise, the first of three sisterships. Saint Nicolas and Martha Ann followed in 2007 and 2008. The styling of all three was the work of Espen Øino, while the interior designer was François Zuretti. This proved to be a winning combination of yard, naval architect, stylist and interior designer as the yachts turned out to be successful charterers. There was one main difference between them, however: Apoise, the oldest,...

The new owner shrewdly decided to live with the boat for a year, slowly drawing up plans to maximise her lifestyle potential The upper deck is also devoted to the outdoors (left), with lounging areas along the side, and a table seating 10 for informal dining The yacht’s stern is lengthened to provide room for the beach club (below)

‘At first I wasn’t going to change anything except for the soft goods,’ says Caudwell. ‘Then we realised we just didn’t like the gym and it seemed the layout did everything badly’ yacht was sold for €34.75 million. While some brokers felt this was far less than a proper asking price, it suited Ritchie, who said he had received fair market value and was sure her new owner would enjoy cruising the world as much as he had. That prediction has turned out to be true, although British entrepreneur John Caudwell could not have foreseen buying the yacht even a few months earlier – at the time he...

The biggest visible change to the old Apoise (below) is around the stern, which on Titania (right) now features the beach club A prestigious second master suite (right) with impressive views was constructed on the upper deck, replacing the old observation lounge (below) ‘The big thing for me with this work was to be in touch with the water,’ says Caudwell. ‘We have so many entertainment areas now that the boat has been transformed’ now opens on to the new beach club. This has a bar at one side, a sitting area at the other side and enough space for a dayhead and sauna. A rain shower in the...

TI TA NI A With two tenders and a variety of watersports toys, the refitted yacht’s devotion to a lifestyle of the sea and outdoors is central The new beach club has a bar at one side, a seating area at the other and a wide array of water toys from metal frames and a core of mineral rock wool. The overheads are covered with leather panels, all in the same style and colours as used in the other master suite. The immaculate interior joinery was done by Vedder of Germany and the colour scheme and soft furnishings throughout were chosen by Rebekah Caudwell, John’s daughter, who has a design... 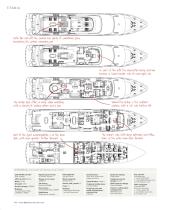 Both fore and aft, the sundeck has plenty of sunbathing space, bracketing the central swimming pool As part of the refit, the observation lounge and bar became a second master suite of near-equal size Behind the bridge is the captain’s captain, with a VIP suite further aft The bridge deck offers a large saloon amidships, with a variety of seating options and a bar Most of the guest accommodation is on the lower deck, with crew quarters further forward The owner’s suite, with large bathroom and office, takes up the entire main deck forward TITANIA Lürssen (original and refit) LOA 70.8m...

All Lurssen Yachts catalogs and brochures