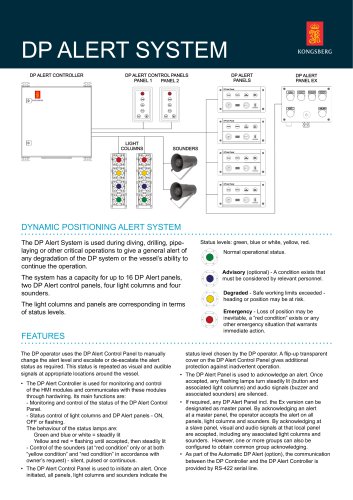 DYNAMIC POSITIONING ALERT SYSTEM The DP Alert System is used during diving, drilling, pipelaying or other critical operations to give a general alert of any degradation of the DP system or the vessel’s ability to continue the operation. The system has a capacity for up to 16 DP Alert panels, two DP Alert control panels, four light columns and four sounders. The light columns and panels are corresponding in terms of status levels. FEATURES The DP operator uses the DP Alert Control Panel to manually change the alert level and escalate or de-escalate the alert status as required. This status is repeated as visual and audible signals at appropriate locations around the vessel. • The DP Alert Controller is used for monitoring and control of the HMI modules and communicates with these modules through hardwiring. Its main functions are: - Monitoring and control of the status of the DP Alert Control Panel. - Status control of light columns and DP Alert panels - ON, OFF or flashing. The behaviour of the status lamps are: Green and blue or white = steadily lit Yellow and red = flashing until accepted, then steadily lit - Control of the sounders (at “red condition” only or at both “yellow condition” and “red condition” in accordance with owner’s request) - silent, pulsed or continuous. • The DP Alert Control Panel is used to initiate an alert. Once initiated, all panels, light columns and sounders indicate the Status levels: green, blue or white, yellow, red. Normal operational status. Advisory (optional) - A condition exists that must be considered by relevant personnel. Degraded - Safe working limits exceeded heading or position may be at risk. Emergency - Loss of position may be inevitable, a “red condition” exists or any other emergency situation that warrants immediate action. status level chosen by the DP operator. A flip-up transparent cover on the DP Alert Control Panel gives additional protection against inadvertent operation. • The DP Alert Panel is used to acknowledge an alert. Once accepted, any flashing lamps turn steadily lit (button and associated light columns) and audio signals (buzzer and associated sounders) are silenced. • If required, any DP Alert Panel incl. the Ex version can be designated as master panel. By acknowledging an alert at a master panel, the operator accepts the alert on all panels, light columns and sounders. By acknowledging at a slave panel, visual and audio signals at that local panel are accepted, including any associated light columns and sounders. However, one or more groups can also be configured to obtain common group acknowledging. • As part of the Automatic DP Alert (option), the communication between the DP Controller and the DP Alert Controller is prov