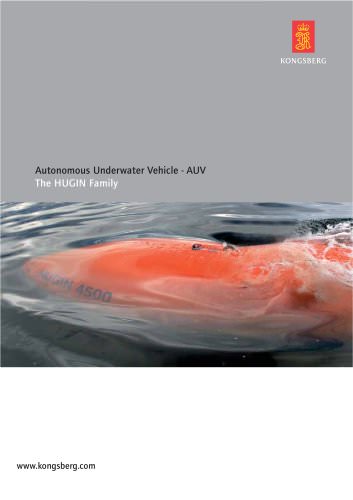 HUCIN 1000 (1000 meter version) HUCIN 1000 (3000 meter version) Maximizing performance by providing The Full Picture We shall earn the respect and recognition for our dedication to provide innovative and reliable marine electronics that ensure optimal operation at sea. By utlilising and integrating our technology, experience and competencies in positioning, hydroacoustics, communication, control, navigation, simulation, and automation, we aim to give our customers The Full Picture. The Full Picture yields professional solutions and global services that make a difference enabling you to stay...

Kongsberg Maritime is one of the major suppliers of high quality marine electronics in the world, with products ranging from cameras for underwater vehicles to triple redundant dynamic positioning systems for oil drilling rigs, sonars and instrumentation systems for scientific research vessels. The products are designed, tested and produced to be reliable over a long time in the tough Kongsberg Maritime designs and manufactures commercial off the shelf (COTS) autonomous underwater vehicles (AUV) and related equipment. The various HUGIN vehicles share the same basic technology. The...

Introduction The HUGIN Autonomous Underwater Vehicle (AUV) program started early 1990 with a dual civilian and military application strategy. Since 1997 the HUGIN vehicles have been successfully used for civilian applications and from 2001 for military applications. The HUGIN AUVs have been developed jointly by Kongsberg Maritime and the Norwegian Defence Research Establishment (FFI). For the offshore oil and gas industry the HUGIN 3000 class AUVs have accumulated more than 150.000 km (per 2007) of survey world wide, ranging from shallow water down to 3000 meters. The vehicles run survey...

FIELD EXPERIENCE HUCIN AUVs have surveyed most of the major deepwater offshore oil and gas fields world wide. The precise positioning of an exceptional stable payload sensor carrier being operated close to the sea bottom at high speed has revolutionized deep water surveying with respect to survey efficiency and data quality. Based on high quality HUCIN data, significant higher precision and cost savings are obtained in the engineering of major subsea developments in deep water and rough terrain. Field operations have taken place world wide from arctic to tropical areas. More than three...

Today the HUCIN Family of AUVs constitutes three basic models: • HUCIN 1000 (1000 and 3000 meter depth versions) HUCIN AUVs build on a common and well proven technology base. This is especially true for the navigation, control, payload, communication, propulsion and emergency systems. The main vehicle differences are size, battery technology and endurance, and payload sensor configuration. The larger the vehicle, the more comprehensive and capable sensor suite can be fitted. Since the first commercial operation in 1997, HUCIN AUVs have found application • Offshore surveying for the oil and...

Important highlights for the HUCIN vehicles are: • Commercial field work since 1997 • Autonomous, semi-autonomous and supervised operational modes • DVL aided INS system with a toolbox of position aiding techniques • Flexible payload system • Pressure tolerant power sources for up to 60 hours operation at four knots with extensive payload suite. • Safe launch and recovery system for use up to sea state 5

HUGIN 1000 is 75 cm in diameter and is available with 1000 m and 3000 m depth ratings. HUGIN 1000 is built with a three module structure - standardized aft and front sections and one or two modular midsections. The midsection(s) can be configured with a wide range of payload sensors like sidescan sonar, synthetic aperture sonar, multibeam echo sounder, sub-bottom profiler, fishery sonar, laser plankton counter, etc. The power source is a pressure tolerant lithium polymer battery providing an endurance of approximately 24 hours at four knots (speed and payload configuration dependent). The...