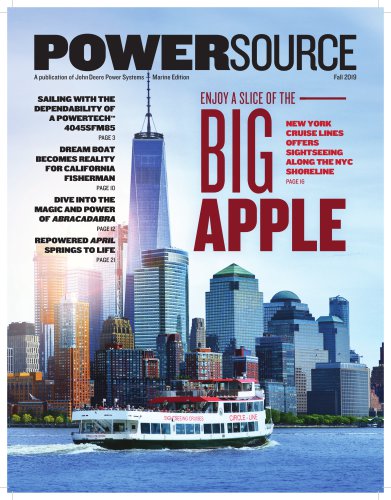 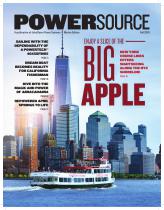 ON THE COVER A Circle Line Sightseeing vessel cruises the New York City waterfront. COVER STORY Relax and enjoy the narrated ride around New York Harbor aboard a John Deere-powered vessel owned and operated by New York Cruise Lines. You’ll enjoy a taste of the Big Apple aboard a New York Water Taxi, World Yacht dinner cruise vessel, or a Circle Line Sightseeing ship. The company’s vessels have been showing off New York City’s waterfront landmarks to more than 85 million passengers since 1945. Emerald Lady shines with a new PowerTech™ 4045SFM85 engine YONA motors the Mediterranean with...

Montalvo and his wife, Sarita, spend as much of their time as possible aboard Emerald Lady. Both are natives of Puerto Rico and enjoy cruising back and forth from their island home in Puerto Rico to their home on the Manatee River in Tampa Bay, Florida. The Emerald Lady also takes the couple on many excursions throughout the Caribbean, including the Bahamas, Turks and Caicos Islands, Virgin Islands, Cayman Islands, and the Dominican Republic. This year Montalvo plans to retire and take more extensive trips aboard Emerald Lady. However, the vessel’s old diesel engine had become increasingly...

Mixing a vintage vessel with modern technologies, the refitted YONA is the pride of owner Sergio Montalcini and captain Giacomo Ceccarelli. They took their time over five years to transform the rather dilapidated Vripack into a comfortable, practical yacht with a personality and look all its own. And a John Deere PowerTech™ 13.5L engine powers this "white dove" (yona is Hebrew for dove) on her voyages around the Mediterranean and beyond. ! REVAMP, INCLUDING A IE ENGINE, TRANSFORMS OM UGLY DUCKLING TO :EFUL ‘WHITE DOVE’ An eye for potential The search for YONA began when Sergio Montalcini...

When less is more Ceccarelli and Montalcini replaced the original 134-kW (180-hp) engines with a single John Deere PowerTech™ 6135AFM85 Tier 3/Stage III A engine. This engine was suggested by Rettifiche Genovesi, a John Deere marine dealer for Rama Motori, a John Deere Power Systems engine distributor in Italy. The engine drives the propeller with a gear ratio of 4:1, as well as the PTO, power steering, hydraulic winch, lateral thrusters, and stabilizers. “WE ARE VERY PLEASED WITH THE JOHN DEERE ENGINE. THE SIMPLICITY OF DESIGN MAKES MAINTENANCE SIMPLE. WHEN CRUISING, THERE IS LESS NOISE,...

(20-foot-wide) beam. Main propulsion comes from a 242-kW (325-hp) John Deere PowerTech™ 6090AFM85 engine. The 14.3x6-meter (47x20-foot) crab vessel features a single John Deere propulsion engine and a 60-kWe John Deere–powered generator set. “When I discussed engines with Mike Wahl, Fred’s son, he mentioned that their company uses many John Deere engines in the new boats they build,” explains Rando. “I told him that’s good because that’s the engine I want in my new boat. A bunch of my ﬁshing buddies use John Deere engines, and they really like them. Plus, I already have experience with a...

REPOWERED ABRACADABRA REVEALS THE WONDERS OF THE TUSCANY ARCHIPELAGO TO NEW AND EXPERIENCED DIVERS Historic cities, breathtaking art, delicious local dishes and wines — Tuscany has it all! But what the tourists may not know is that, below sea level, the Tuscany Archipelago harbors some stunning beauties, from amazing corals to Roman shipwrecks. The Porto Ercole diving center, Argentario Divers, reveals these underwater secrets, which new and experienced divers reach aboard their customized, John Deere–powered diving boat Abracadabra. continued on page 14

The diving center is a stone’s throw away from the islands of Giannutri and Giglio, whose surrounding waters are part of the Parco Nazionale Arcipelago Toscano, the rst great marine park in Italy and the largest protected marine area in Europe. In this magical setting, Argentario Divers offers a range of diving courses and experiences. Preserve, protect, and enjoy Argentario Divers is determined to preserve this beautiful environment. “We don’t use plastic in our center or Abracadabra, we remove old fishnets we find in the sea, and we organize open cleanup days in our area,” says Simone...

NEW YORK CRUISE LINES OFFERS A VARIETY OF MARITIME SIGHTSEEING, DINING, AND TAXI SERVICES AROUND SCENIC NEW YORK HARBOR ooking for a scenic way to get to downtown Manhattan? Yearning for a sightseeing tour of New York City’s dazzling waterfront, perhaps with some dinner and entertainment? Let New York Cruise Lines (NYCL) be your guide. Headquartered in midtown Manhattan, NYCL is an established maritime sightseeing, entertainment, dining, and transportation company servicing some of New York City’s most popular waterfront destinations and attractions. NYCL’s rich history began in 1945 with...

The modern ships align with the company’s mission to give passengers a safe and memorable boating experience. It’s all in the details, from the fact-filled narration to the quality and safety of its vessels and systems, including generator sets that supply power to the lighting and sound system. “The tour guides always put great detail into what they say,” relates Duffy, “and with the John Deere-powered generator sets, we don’t have to worry about the commentary not being heard.” WE'VE BEEN RUNNING JOHN DEERE SINCE 2016, AND WE'VE NEVER HAD AN ISSUE. — Gus Markou, New York Cruise Lines On...

April cruises 8 knots at 1800 rpm with a PowerTech 4.5L engine. “I’ve had a long working relationship with Rich McGovern,” says McAllister. “He answers the phone when we need him, shows up, and will even come with parts in his truck. It’s a really nice relationship." Hey, taxi! More recently, McGovern supported the effort to repower three high-speed catamarans in the New York Water Taxi fleet with PowerTech™ 6135SFM85 engines. “The water taxis were built in 2002, and we wanted new engine technology that was lighter, Tier 3-compliant, that could create more torque and horsepower, and also...