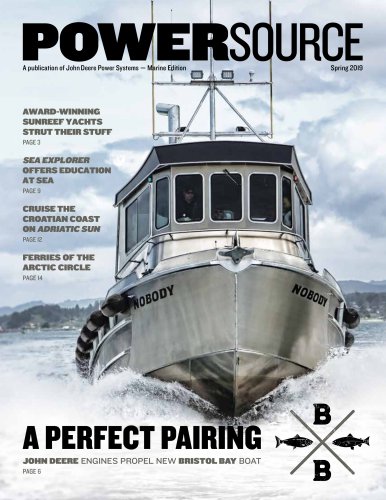 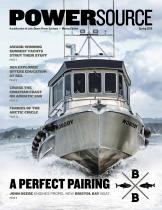 ON THE COVER North River Boats launches its first Bristol Bay boat with a single PowerTech™ 6135SFM85 engine. The customizable Sunreef 80 is an all-around sailing leisure yacht ideal for exclusive getaways, charter, and transoceanic adventures. North River Boats of Roseburg, Oregon, continues to expand its extensive line of heavy-gauge vessels with the launch of a new Bristol Bay commercial fishing boat. The 10-meter (32-foot) Dick Smitha hull packs up to 7 metric tons (16,000 pounds) of fish and is offered in single or twin jet propulsion, as well as a single prop, such as the commercial...

The spacious flybridge offers additional dining and lounging options. can effortlessly enter and exit ports, and dock. The engines drive four SPW folding propellers at a ratio of 1:2,493; for quick trips, the engines can be engaged alone. Engine maintenance is easy, as the spacious hulls provide ample access to service the engines from all sides. “These engines can be operated at low rpm which I believe contributes to low vibration, fuel efficiency, and long engine life,” adds Lapp. “This makes both us and our customers happy.” Sunreef has been using John Deere 168-kW (225-hp) PowerTech...

fish fast, and he wanted a robust steering system that wasn’t going to fail. The Bristol Bay has a wheel drive on the deck gear, which provides more pulling capacity and torque so that you can pull a net and pick fish while towing a net. and Gregg's Diesel in Dillingham. They are among 11 other John Deere marine dealers throughout Alaska. Did you purchase the engine through your John Deere engine distributor, Cascade Engine Center? Blocher: Yes, they performed the sea trials in Naknek to test the engine and make sure the systems were operating properly. They understand, just as we do, that...

The MS Adriatic Sun offers cruisegoers a luxury experience along the Dalmatian Coast that keeps them right in the middle of the action. Sleek and agile, the MS Adriatic Sun offers cruise-goers a luxury experience along the Dalmatian Coast Croatia is well-known for its enchanting coast, which draws visitors from around the world to its historic towns, beautiful bays, and coves. And to view it in sheer luxury, you can’t beat the MS Adriatic Sun. Launched in June 2018, Adriatic Sun was specially designed to easily maneuver in and out of small historic ports. Measuring just 45 meters (144 feet)...

On the east coast of Texas along the Gulf of Mexico lies the Port of Corpus Christi. On any given day, large seagoing commercial vessels are anchored in the deep water awaiting the loading and unloading of cargo. About 753 million metric tons (283 million U.S. tons) of cargo moves through the port annually, making it the fifth largest port in the United States in total tonnage. ocated in Aransas Pass, Texas, G & S Marine crew boats are strategically positioned to make daily treks to and from the large seagoing vessels to transfer personnel and supplies. Among them is the Gulf Star. The... 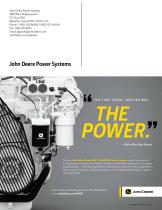