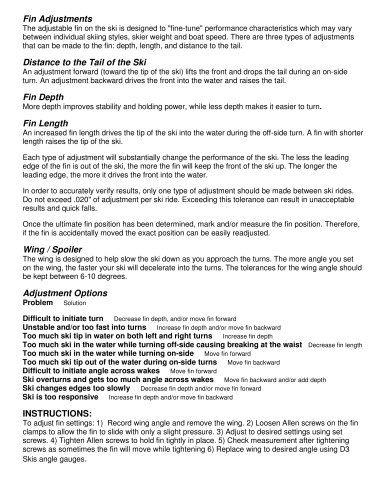 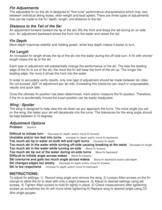 Fin Adjustments The adjustable fin on the ski is designed to "fine-tune" performance characteristics which may vary between individual skiing styles, skier weight and boat speed. There are three types of adjustments that can be made to the fin: depth, length, and distance to the tail. Distance to the Tail of the Ski An adjustment forward (toward the tip of the ski) lifts the front and drops the tail during an on-side turn. An adjustment backward drives the front into the water and raises the tail. Fin Depth More depth improves stability and holding power, while less depth makes it easier to turn. Fin Length An increased fin length drives the tip of the ski into the water during the off-side turn. A fin with shorter length raises the tip of the ski. Each type of adjustment will substantially change the performance of the ski. The less the leading edge of the fin is out of the ski, the more the fin will keep the front of the ski up. The longer the leading edge, the more it drives the front into the water. In order to accurately verify results, only one type of adjustment should be made between ski rides. Do not exceed .020" of adjustment per ski ride. Exceeding this tolerance can result in unacceptable results and quick falls. Once the ultimate fin position has been determined, mark and/or measure the fin position. Therefore, if the fin is accidentally moved the exact position can be easily readjusted. Wing / Spoiler The wing is designed to help slow the ski down as you approach the turns. The more angle you set on the wing, the faster your ski will decelerate into the turns. The tolerances for the wing angle should be kept between 6-10 degrees. Adjustment Options Problem Solution Difficult to initiate turn Decrease fin depth, and/or move fin forward Unstable and/or too fast into turns Increase fin depth and/or move fin backward Too much ski tip in water on both left and right turns Increase fin depth Too much ski in the water while turning off-side causing breaking at the waist Decrease fin length Too much ski in the water while turning on-side Move fin forward Too much ski tip out of the water during on-side turns Move fin backward Difficult to initiate angle across wakes Move fin forward Ski overturns and gets too much angle across wakes Move fin backward and/or add depth Ski changes edges too slowly Decrease fin depth and/or move fin forward Ski is too responsive Increase fin depth and/or move fin backward INSTRUCTIONS: To adjust fin settings: 1) Record wing angle and remove the wing. 2) Loosen Allen screws on the fin clamps to allow the fin to slide with only a slight pressure. 3) Adjust to desired settings using set screws. 4) Tighten Allen screws to hold fin tightly in place. 5) Check measurement after tightening screws as sometimes the fin will move while tightening 6) Replace wing to desired angle using D3 Skis angle gauges.

All D3 catalogs and brochures