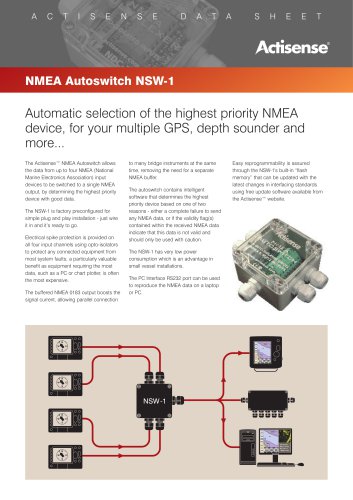 Actisense NMEA Autoswitch NSW-1 The Actisense™ NMEA Autoswitch allows the data from up to four NMEA (National Marine Electronics Association) input devices to be switched to a single NMEA output, by determining the highest priority device with good data. The NSW-1 is factory preconfigured for simple plug and play installation - just wire it in and it’s ready to go. Electrical spike protection is provided on all four input channels using opto-isolators to protect any connected equipment from most system faults; a particularly valuable benefit as equipment requiring the most data, such as a PC or chart plotter, is often the most expensive. The buffered NMEA 0183 output boosts the signal current, allowing parallel connection to many bridge instruments at the same time, removing the need for a separate NMEA buffer. The autoswitch contains intelligent software that determines the highest priority device based on one of two reasons - either a complete failure to send any NMEA data, or if the validity flag(s) contained within the received NMEA data indicate that this data is not valid and should only be used with caution. The NSW-1 has very low power consumption which is an advantage in small vessel installations. The PC Interface RS232 port can be used to reproduce the NMEA data on a laptop or PC. Easy reprogrammability is assured through the NSW-1’s built-in "flash memory" that can be updated with the latest changes in interfacing standards using free update software available from the Actisense™ website.

All Actisense catalogs and brochures